The art and science of hand -reading originated in India. In ancient India Narada, practiced this art. In North West India, this art was practiced by Joshi Brahmins from ancient times. An early reference is found in the Yudh Kanda of Valmiki Ramayana.

The famous German Author Desbarolles states “This is an ancient art of divination by means of stated rules and not by intuition. These rules work all the  time and under all circumstances while intuition comes and goes, but the rules set remain unchanged”.

Captain d’ Arpentigny: He developed the ingenious and accurate startlingly accurate system that includes, under the name of Chirognomy.

Upto to the age of 14, the hand of child grows along with the body and mind. Lines undergo changes. Indications drawn from them are not dependable until one attains the age of 14. Smaller lines do change thereafter, but major lines remain unchanged.

Will power represents the soul and can change a person, his character and thus his luck.

Only man is endowed with the wonderful organ of hand. It is an organ of action and sensibility.

Large Hands: the possessor of such hands is fond of details. He is irritable by temperament.

Broad Hands:  This type of hands shows common sense, broad -mindedness, activity and a practical and business like attitude.

Small Hands: The processor of this type of hand plans more than he/she can execute.

Large and narrow hands: this person is more imaginative, and idealistic than practical and also selfish.

The universe is a book of Nature ‘s secrets. Man has been discovering its laws in every sphere since he came to inhibit the earth. He has made many discoveries and inventions.

He has taken advantage of knowing Nature’s laws in his daily life. Knowing the secret of palmistry or astrology is not forbidden. These can also be probed like research in other fields for the benefit of humanity. Forewarned is forearmed.

Yet, man has limitations, He cannot always do or undo whatever he desires. It is natural and spontaneous for him, to act I his best interests without harming others. He cannot forsake his efforts. We cannot change karmic happenings.

There is always a tug of war between the past karmas and the present efforts. Who knows the strength of each?

Those who practice this divine science can only indicate in a way, what will take place in future. Who else except the Creator Brahma, can say with certainty what will definitely happen?

The practicing palm reader, should observe all the niyamas prescribed in ‘Yoga Sutra’.

There should be scientific approach to knowing the future.

The Ayurvedic system of medicine recognises the presence of such humours in the human body, and their proper proportion keeps the man healthy.

Above four humours as per the fixed law of Chirognomy are:-

According to Chiero the presence of the lines on a palm, is due to the action , of a nervous fluid, more subtle than electricity.

Lines are formed by the brain cells acting through the blood vessels and nerves.

As human beings differ in shape, features constitution, etc., so do the lines on the hands- so much so that the ridges do not agree with those of nay other thumb and fingers even from amongst 100 crores of people!

Even twin born with the same ascendant sign, do not have same shape or ridges on the palm.

These ridges cannot be erased or destroyed even by the use of acid, they reappear and hence their importance in forensic science for preserving the finger prints of criminals by the police and other such investigating agencies all over the world. Signature can be forged, but not the thumb impressions.

Saint Germain mentions a vital fluid which permeates the human body, leaving marks on the palms and then running up to the brain, as the cause for the presence of lines on the palm.

When someone asked me while discussing the subject, why are there lines on the palm? What do these lines signify?

I reflect upon his question and replied back, since it was something ,Nature has not made by mistake or are created randomly by the folds of the hand or by its use or working, since there is nothing , in this vast universe which is not governed ,by some law or the other. These are Nature’s marks and are definite and accurate. Samudrik  Shastras deals with signs and marks on the human body ,each feature has its meaning and so have the lines on the hands. Lines on the palm cannot betray its owner. 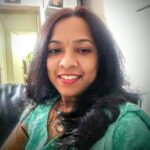 Saumita is an MBA Graduate from SCDL, worked as Executive Assistant to
Director. Post Graduate in English Literature.
She owns Saumaaz Holistic Healing Center in Bangalore.
She is formally trained in Vedic Astrology from Shiv Prasad Tata, lifetime member of ICAS( Indian Council of Astrological Science)
Featured Author of reikirays.com, she love to write, passionate in
exploring esoteric subject.
She loves to investigate on horoscopes, travelling.
She is ardent follower of GMCKS; an Arahatic Yogi and Associate Certified
Pranic Healer, Reiki Master,
Founder of Lady Kuan Yin and Maa Durga Healing modality, and DLA
practitioner.
She is involved in many philanthropic work and at service of Humanity.

2 thoughts on “Palmistry- The Divine Science”